In 2015 Anne Case and Angus Deaton wrote a paper documenting mortality increases among white middle-aged lower socio-economic status people in the United States. The paper attracted a lot of debate both in terms of its political implications and the complexities of the statistical analysis used to calculate the trends (see e.g. Gelman and Auerbach reply, Case and Deaton reply; Noah Smith summary of the debate).

Case and Deaton have recently released another working paper that increases the scope of their original work, including the addition of a wider set of comparison groups, including Ireland. The paper is available at this link. The key table that includes Ireland is below, showing the well-documented declines in mortality during this period, that were partly offset by increases in deaths from drugs, alcohol, and suicide. The late Brendan Walsh had an excellent paper that shows what lies beneath the suicide aspect of most of these trends for Ireland, in particular the competing roles of high but declining rates of alcohol consumption and initially low but then sharply increased rates of unemployment. Richard Layte and others have written about the patterns of mortality during the bulk of this period. The declines in mortality from heart disease among this age group really gives some pause for thought. 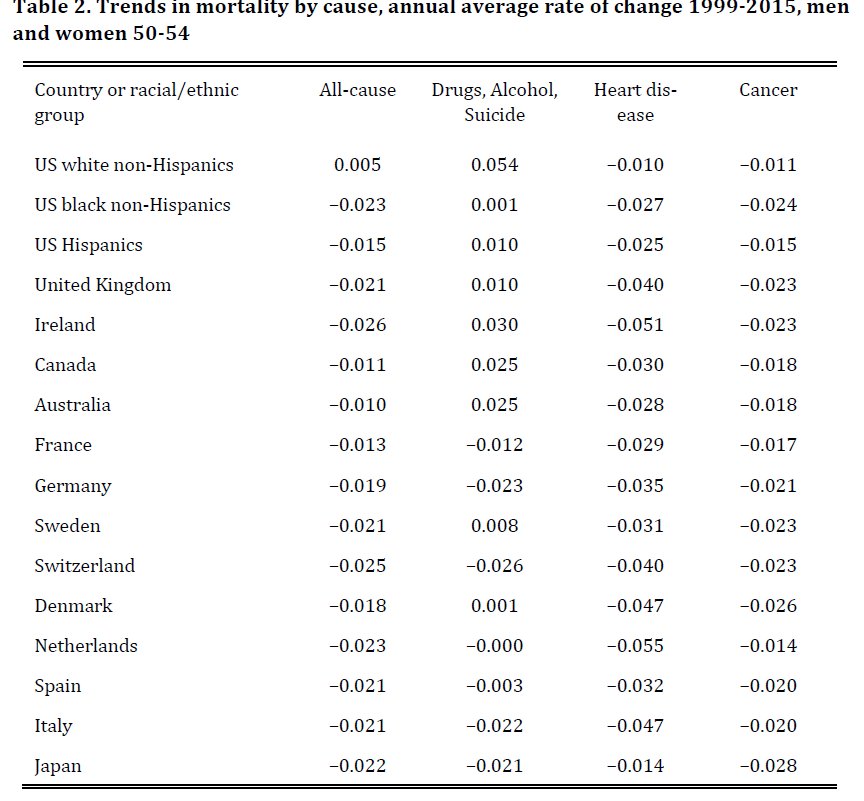 3 replies on “Mortality and Morbidity in the 21st Century”

Ireland has had one of the largest falls in mortality and one of the largest rises in life expectancy (which is calculated from mortality rates) in the Western world in the past 25 years. This is confirmed in the above table (although it appears to be only for persons aged 50-54). This rather knocks on the head a theory that was going the rounds a few years ago, namely that the Celtic Tiger was bad for the country’s health. A book was published making this claim at peak Celtic Tiger called (if I remember correctly) Growth: The Celtic Cancer. I remember posting on the Irish Times blog at the time that the claim was nonsense, and I see no reason to change my mind now.

There are many factors that affect mortality, including: living standards, lifestyle, climate, health service. Generally, because of better climate the Mediterranean countries have lower mortality rates than northern European countries, although they are poorer. A fascinating comparison can be made between Ireland and Scotland. Both have fairly similar living standards, lifestyle and climate, leaving health service as the main differential. In the mid 90s mortality rates in the two countries were almost identical. By 2015 they were 20% lower in Ireland. Mortality rates for middle-aged people (35-65) are dramatically lower in Ireland than in Scotland (up to 40% lower). Mortality rates in N. Ireland are now also significantly higher than in the Republic, although not as bad as in Scotland. It would be interesting if some research was done into the trend in mortality rates in the 3 countries over the past 25 years with a view to explaining why Scotland and, to a lesser extent, N. Ireland have done much worse than the Republic of Ireland. However, since the results of such research would be unlikely to bolster the case for the left’s declared objective of introducing a fully socialised health service to the Republic, its unlikely that such research will ever be done.

I’d second your suggestion that research be done to analyse why the rates in the three countries are diverging. But I don’t get the reference to the left’s desire for a fully socialised health service preventing such a study being conducted. Seems like an unnecessary side-swipe in an otherwise thoughtful comment. I believe we would agree that there is so much more to public health than a health service/healthcare system, whether socialised or not (the USA amply underlines that point). I’m clearly missing something…

Many thanks for highlighting this latest paper by Case and Deaton. Their initial paper has caused a lot of hand-wringing, angst and the usual shouting from the polarised echo chambers in the US. It is possible, given the US’s usual exceptionalism, that a unique combination of factors is at play there among white non-Hispanics. It would be interesting to see the rates of change presented in Table 2 disaggegated by gender and by time – 10 years and then 5 years. I suspect it would tell a more nuanced story around the Great Recession.

But even as it is, it suggests that the increased mortality due to drugs, alcohol and suicide is very much an Anglo-Saxon economic affair (with the Dutch and the Scandinavians who have being thrashing their welfare states over the last two decades joining in). The decline in deaths from heart disease among this age cohort in Ireland is probably not unrelated to the smoking ban.